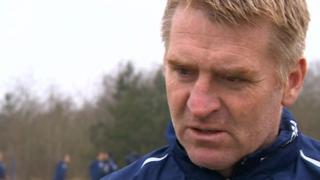 Walsall boss Dean Smith has paid tribute to his squad, labelling the Saddlers' current League One position "a fantastic achievement".

After back-to-back relegation battles, Walsall find themselves just two points outside the play-offs with three games to go, after a 13-game unbeaten run.

"There are a lot of smiles on a lot of faces," said Smith, who has picked up three successive Manager of the Month nominations in League One.

"It's nice to be at the upper levels of the league and we are having a ball at the moment," he said ahead of Saturday's trip to Scunthorpe.

Walsall's progress under Smith this season will be featured on BBC Late Kick Off Midlands at 2325 on BBC1 on Sunday, 14 April.

The extraordinary rise and fall of Gordon Elliott