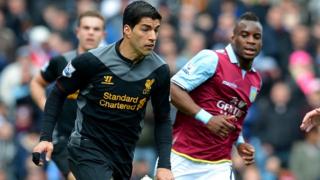 Liverpool captain Steven Gerrard hails "sensational" striker Luis Suarez who he says is a "nuisance" and a "nightmare to defend against".

The Uruguayan won the penalty which Gerrard converted to earn Liverpool a 2-1 win at Aston Villa on Sunday, Jordan Henderson had earlier equalised Christian Benteke's first-half goal for the home side.

Suarez has scored 29 goals in all competitions this season and Gerrard reiterates his calls for him to be "footballer of the year".

Scottish Premiership: Hagi with third for Rangers in title hunt; Kilmarnock pull one back