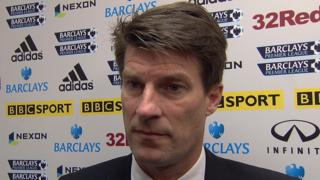 Swansea City manager Michael Laudrup believes his side should have "done better" in their 2-1 loss at home to Tottenham Hotspur.

After two early goals from Tottenham, a goal in the final 20 minutes from Michu was not enough to prevent Swansea's fourth Premier League defeat in five games.

Despite their recent poor run of form, Laudrup insists the team "still has time" to improve their current league position of ninth.