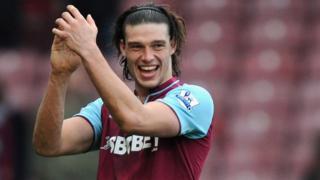 Carroll scored a header and a "world class" volley, either side of curling strike by Gary O'Neil, before Graham Dorrans scored a late penalty consolation for the visitors. West Brom midfielder Youssouf Mulumbu was sent off in added time for kicking the ball at O'Neil.

The win is West Ham's seventh at home this season and moves them six points clear of the relegation zone.