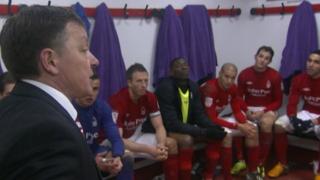 When Nottingham Forest manager Billy Davies was sacked 21 months ago, he left with an agreement in place to make a fly on the wall feature with BBC Late Kick Off Midlands reporter Natalie Jackson.

On his dramatic return to his old club he has fulfilled that promise.

Late Kick Off Midlands has been given access all areas over the last few weeks to give fans an insight into the life of a modern day football manager.

Late Kick Off has been in team meetings, filmed in the dressing room after the recent 1-0 win over Ipswich Town, and interviewed Davies at his family home in Glasgow.

The film coincides with one of the best runs the former European champions have had for many years.

Forest have won five Championship games in a row to enter the top six with just nine games to go.

Late Kick Off Midlands is on the iPlayer and returns on BBC1 after Match of the Day 2 on Sunday.