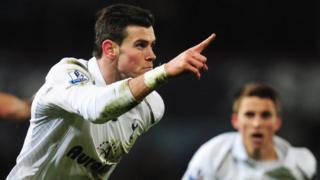 Manager Andre Villas-Boas says the "tremendous" Gareth Bale "inspired" his Tottenham team-mates as the Welshman scored a stunning late winner in the 3-2 Premier League away win at West Ham.

The 23-year-old had driven Spurs ahead before Andy Carroll won and scored a penalty, and Joe Cole then put the Hammers in front. Gylfi Sigurdsson drew the visitors level before Bale's last-minute decider.

The strike means Bale has now scored eight of his team's last 10 goals in all competitions, with the win taking Tottenham up to third in the Premier League.