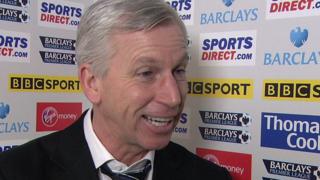 Newcastle manager Alan Pardew says Papiss Cisse's goal was a "real special one", as his side beat Southampton 4-2 on Sunday.

Despite falling behind early on, the Magpies rallied back with four goals - including a stunner from Cisse - to move six points clear of the drop zone.

The victory is the first time Newcastle have won a league game this season after conceding the opening goal.