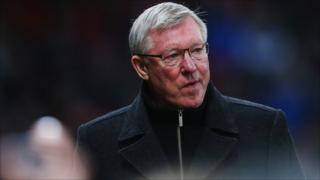 Manchester United boss Sir Alex Ferguson admits his side were "a bit fortunate to win the game" after their 2-1 home victory over Southampton.

Jay Rodriguez scored a third-minute opener for the visitors, but Wayne Rooney swiftly hit the net twice in the first half.

The comeback win opened up a seven-point gap at the top of the Premier League for United, but a relieved Ferguson described Saints as "the best team to have played at Old Trafford this season."