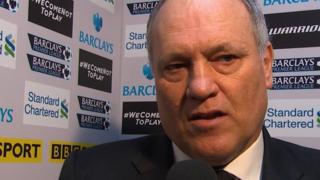 Fulham manager Martin Jol says he wants to forget his side's 4-0 defeat at Anfield "as quickly as possible" and turn his attention back to their points target.

Liverpool took an early lead through Martin Skrtel, with Steven Gerrard and Stewart Downing also getting on the scoresheet.

Jol admits his side could not put pressure on the Reds and blames "bad defending" for Luis Suarez's fourth in injury time.