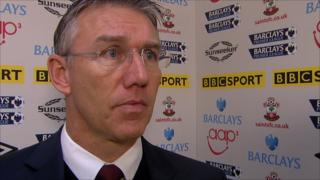 Southampton manager Nigel Adkins says his side were "uncharacteristically flat" in their 1-0 defeat by Sunderland.

Steven Fletcher struck his eighth Premier League goal of the season at the end of the first half to lift Sunderland four points clear of the relegation zone.

Adkins says the busy festive schedule means they will have to quickly move on and turn their attention to their Boxing Day match at Fulham.

Bamford back at the Bridge with a point to prove