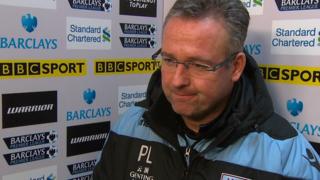 Manager Paul Lambert lauds the "sensational" Christian Benteke as two goals from the Belgium striker help Aston Villa to a 3-1 victory over Liverpool at Anfield.

The Scot describes as "world class" Villa's second goal, which Benteke set up for Andreas Weimann with a clever backheel, having fired the visitors into the lead from outside the box.

Lambert says there is "no praise high enough" for his young defence as the win takes Villa up to 14th in the Premier League.