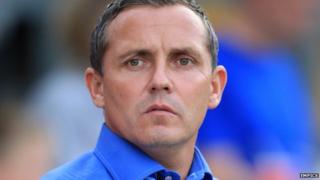 Buckle ready to fight on all fronts

Luton manager Paul Buckle tells BBC Three Counties Radio he will not allow their 5-2 defeat at Newport in the Blue Square Bet Premier affect what they are trying to achieve this season.

"We want to be promoted and we want to have good cup runs as well. At the moment, I think we're on course for all of them," he says.

The Hatters face Matlock in the FA Trophy on Saturday and also have an FA Cup third round tie against Championship club Wolves to look forward to next month, as well as fulfilling their league fixtures over the Christmas and New Year period.