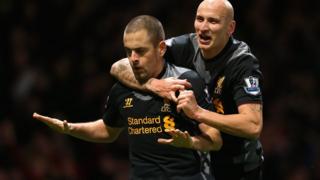 Joe Cole says his goal in Liverpool's 3-2 win over West Ham proves he still has what it takes to play in the top flight.

The midfielder scored the equaliser against his former club, before a late James Collins own goal gave Liverpool their first back-to-back Premier League wins in a year.

Cole praises the home fans for the "lovely" reception he received at Upton Park, and says out of "respect" for them he did not celebrate his goal.