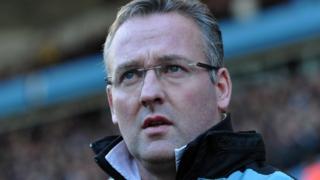 Aston Villa boss Paul Lambert says his team's "effort and commitment" was excellent during their 1-1 draw at home to Norwich.

Lambert faced the club he led from League One to the Premier League, with two successive promotions for the first time since leaving Carrow Road for Villa Park in the summer.

Christian Benteke gave Villa the lead in the first half, but the home side were reduced to 10 men when Joe Bennett was sent off early in the second half, and Michael Turner's headed equaliser earned Norwich a point.