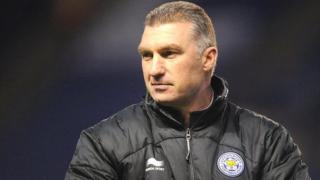 Leicester City manager Nigel Pearson tells BBC Radio Leicester that continued speculation over his future is only a minor irritation.

Pearson's future as Foxes boss was once again questioned in some national media at the weekend, with former Tottenham manager Harry Redknapp being linked as a replacement.

Leicester moved up to fifth place in the Championship table thanks to a late 2-1 away victory over Middlesbrough.