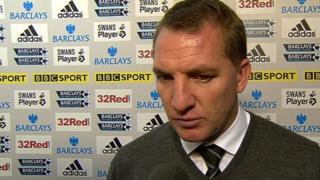 Match was tribute to Speed - Rodgers

Swansea boss Brendan Rodgers says Sunday's game at the Liberty Stadium was a tribute to Wales manager Gary Speed whose death was announced shortly before kick-off.

Rodgers admits his concern for the Welsh players in his squad who "loved" their time with the national team boss.

He goes on to praise the Aston Villa supporters for their part in a moving ovation before kick-off.