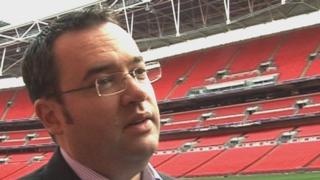 General secretary of the Football Association Alex Horne says "it might be possible" to introduce goal-line technology in time for the start of the 2012/13 Premier League season.

Speaking to BBC Sport's Leon Mann, Horne explains that the English FA remains supportive of the technology, which is used to determine whether the ball has crossed the line.

But he adds that implementing a system in time for the start of the 2012/13 Premier League season depends on testing and securing agreement from other members of the International Football Association Board.

'An iconic Liverpool figure who went on to illuminate TV screens'

What next for England after Wales loss?