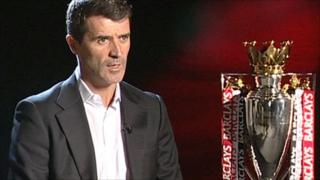 Manchester United legend Roy Keane tells BBC Sport's Colin Murray that Manchester City have made big strides under coach Roberto Mancini but they have a "long, long way to go" before they can be considered a great club.

City go into the Sunday's derby at Old Trafford top of the Premier League table and could go five points clear with a win. But Keane insists they need to win the Premier League title several times and lift the Champions League trophy before they can be put in United's class.