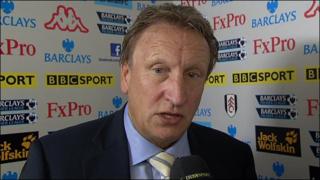 QPR boss Neil Warnock admits his side were "at sixes and sevens" during the 6-0 defeat at Fulham but says his team were "snookered" by injuries.

Warnock says he needs a fully fit squad to be competitive in the Premier League and admits "we just weren't good enough."

He also jokes that there is no point losing his temper with his players after a performance like that "because if I started shouting today I would never shut up."