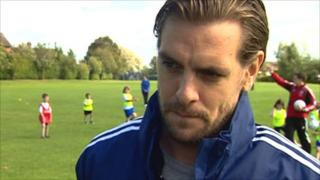 Jonathan Woodgate says it is "disappointing" to be left out of Stoke's Europa League squad for Thursday's game against Dynamo Kiev, but promises to "take it on the chin and get on with it".

Woodgate reveals he signed for Stoke on a free transfer in July because he felt "wanted" by manager Tony Pulis, and also confirms he is on a appearance-related contract at the Britannia Stadium.

The former Real Madrid defender has set himself a target for the season to "play as many games" as possible and avoid injuries, which have plagued his career to date.