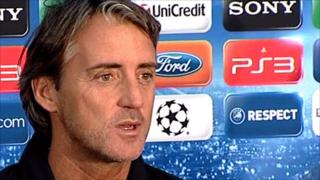 Manchester City boss Roberto Mancini says his side are relishing their "special" opening Champions League match against Serie A side Napoli on Wednesday.

The Group A fixture will be both teams' first appearance in the Champions League, and Mancini warns that Napoli will pose City a tough test.

The Italian insists his side are not feeling under pressure, but admits that it will be "very hard" to qualify top of their group above Napoli, Bayern Munich and Villareal.