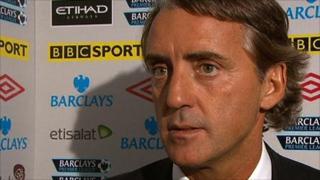 Manchester City boss Roberto Mancini insists there is still room for improvement after his side beat Wigan 3-0 to extend their winning run to four Premier league games this season.

Mancini describes striker Sergio Aguero as "fantastic" after he scored the first hat-trick of his City career.

However, the City boss admits he "feels sorry" for Carlos Tevez after the Argentinian missed a first-half penalty, but says the striker is still not "100%".