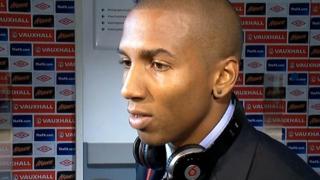 Ashley Young admits it was not the best performance from England as he scores the only goal of the game in their 1-0 win European Championship qualifying match at home to Wales.

The Manchester United winger says that getting three points was the most important thing and believes he is starting to develop a good understanding with club colleague Wayne Rooney.

The result leaves England needing a point from their final Group G match against Macedonia to qualify for next year's championships in Poland and Ukraine.