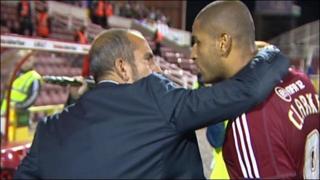 Swindon Town manager Paolo Di Canio has a bust-up with Leon Clarke after their 3-1 Carling Cup loss to Southampton at the County Ground.

Clarke rows with a fitness coach before Di Canio steps in and asks the striker to leave the field. The dispute continues down the tunnel as Di Canio and Clarke remonstrate with each other.

Afterwards, the 26-year-old Clarke, who only joined the club on 19 August after being released by QPR, goes back on to the pitch in protest.

"Clearly there was an incident and it would be wrong to apportion blame until we have all the facts," said Wray. "Leon and the fitness coach were having words after the game and there was a disagreement between them.

"As Leon came off the pitch, Paolo was conscious these things should be done behind closed doors. There was a misunderstanding there that carried on into the tunnel.

"It got to a situation where the whole thing blew up very fast. There was frustration on both sides. The whole issue was trivial but nobody responded in the right way."