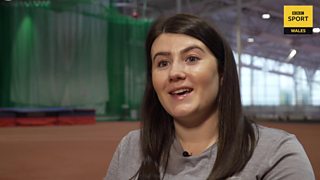 Hollie Arnold says she would love to regain her javelin world record as she targets a fourth consecutive world title.

The World Para-Athletics Championships are under way in Dubai with Arnold competing on Monday, 11 November.

Arnold, 25, is the Paralympic champion in the F46 javelin and has won the last three world titles.