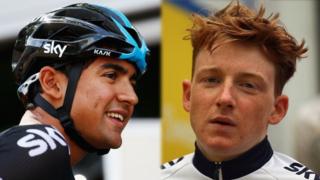 Sky no limit for Hackney's finest

The pair tell BBC Sport's Matt Slater about their formative years at Stoke Newington School in Hackney, the challenge that awaits them as trainees for Team Sky and their ambitions in Friday's U23 race.

Peters joined Chris Froome's team in August on a two-year contract, while Geoghegan Hart has opted to defer joining Team Sky for a season so he can continue his development with American outfit Axeon Cycling.

However, after a run of impressive results, including good showings at the Tour of Britain, many observers predict it will not be long before they are climbing up mountains together in the world's biggest races.