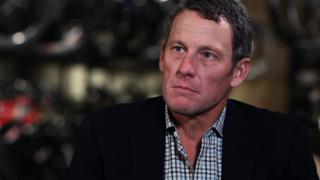 Armstrong on drugs, history and the future

BBC sports editor Dan Roan speaks exclusively to Lance Armstrong in the disgraced cyclist's first TV interview since he confessed to doping over two years ago.

Armstrong ended years of denials by admitting he used performance-enhancing drugs during all seven of his Tour de France wins.

In the interview, Armstrong admits that if it was still 1995, he would "probably do it again."

The 43-year-old, who was also a global cancer campaigner, was dropped by his sponsors, while his cancer charity cut all ties, and his legal problems mounted.

However, he now says he would like his life ban from cycling lifted.

A 30-minute documentary, Lance Armstrong: The Road Ahead, will be broadcast on BBC News at 20:30 GMT on Thursday, 29 January, and again over the following days on that channel and BBC World News. An extended edit of Dan Roan's interview will also be available on the BBC iPlayer.

Liverpool 'cannot rely on the past'

'The handball rule is crazy' - Parker