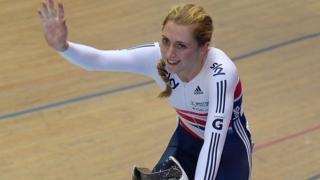 Double Olympic champion Laura Trott triumphs in the women's omnium at the World Cup event in Manchester, saying the home crowd "drove her" to success.

The Briton was sixth overnight but finished second in the individual pursuit before coming first in the scratch race, lapping the group, and winning the time trial finale. Canada's Gillian Carleton claimed silver and French cyclist Laurie Berthon got bronze.

Trott says she is delighted by her success having won team pursuit gold in a world-record time alongside Dani King, Joanna Rowsell and Elinor Barker in Friday's session, and describes this World Cup on home soil as a "really good weekend".