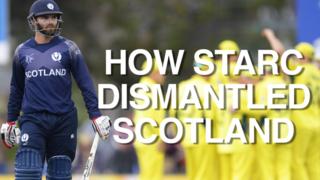 BBC Sport looks at some of the key facts and figures from the 2015 Cricket World Cup as Australia's Mitchell Starc (4-13) claims a record 10th tournament wicket 'bowled' during his side's seven-wicket Pool A win over Scotland in Hobart.

In Pool B India's Suresh Raina (110*) and captain MS Dhoni (85*) shared a 196-run partnership as they confirmed their 100% winning record so far with a six-wicket win against Zimbabwe in Auckland.