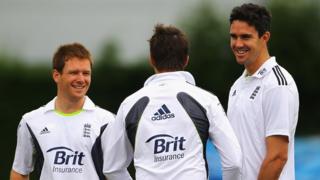 England one-day captain Eoin Morgan says he is "pretty surprised" by Kevin Pietersen's claim that he wants him back in the team.

Morgan insists he is "very happy" with his squad of players as they prepare to face Australia on Friday as part of a warm-up tri-series before their World Cup opener on 14 February.