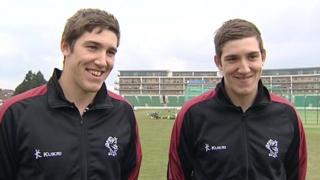 Twins Jamie and Craig Overton talk to BBC Points West about their sibling rivalry at Somerset and their hopes for the 2013 season.

The brothers came through the Taunton club's academy and broke into the senior squad last season.

Jamie (left) made his Championship debut against Surrey last year, a month after Craig's first match against Lancashire.