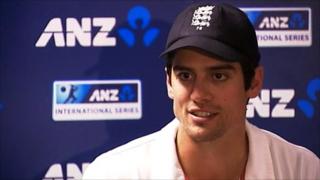 Cook's counterpart, New Zealand skipper Brendon McCullum, admits defeat for his side was "heartbreaking", also paying tribute to Prior's impressive 110 not out after the third Test went down to the final ball of the series.

The epic innings was Prior's seventh Test century and the longest of his 65-Test career.