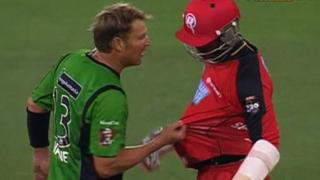 Samuels throws his bat at Warne

Shane Warne has been after clashing with Marlon Samuels in Australia's Big Bash Twenty20 competition.

Warne, captaining Melbourne Stars, had a heated exchange with Samuels - before hitting the West Indian with the ball as he attempted to return it to the wicketkeeper.

Samuels responded by throwing his bat in Warne's direction, before another angry exchange at the MCG.