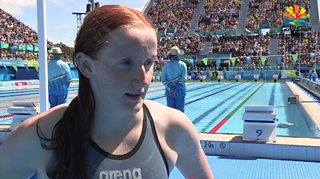 Eighteen-year-old Larne swimmer Hill qualified for the semi-finals of the 50m freestyle and 100m backstroke events.

Sloan missed out on a place in the 200m freestyle final by just eight hundredths of a second.

Thompson was part of the men's 4x100m relay team which qualified sixth for the final by coming fourth in their heat.