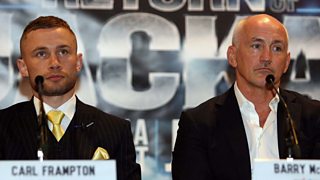 The Belfast boxer had been part of McGuigan's stable since joining the professional ranks in 2009.

Frampton was scheduled to fight Mexican Andres Gutierrez on 29 July but the contest was postponed at the 11th hour after the Mexican sustained injuries following a fall in the shower.

Belfast trainer John Breen offered his thoughts on the split as part of this report by BBC Sport NI's Stephen Watson.

Hamilton 'to keep pushing' against racism