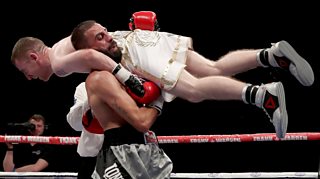 Paddy Barnes says he is disappointed after his flyweight opponent Stefan Slavchev was disqualified to hand him victory on his professional debut at the Titanic Exhibition Centre in Belfast.

The referee stopped the contest in the fourth round when the outclassed Slavchev lifted the double Olympic bronze medallist from Belfast off his feet.

Barnes, whose build-up to the fight was affected by his fiancée's illness, is targeting a shot at the European title.