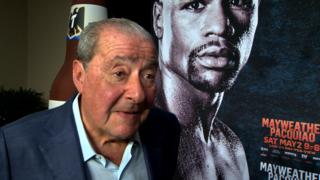 Boxing promoter Bob Arum says the fight between Floyd Mayweather and Manny Pacquiao ranks "right up there" with some of the biggest he has ever seen.

The bout at the MGM Grand in Las Vegas will see Mayweather pocket around £90m while Pacquiao will take home around £60m.