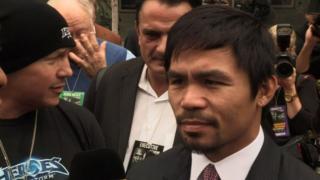 One of biggest fights ever - Pacquiao

Manny Pacquiao says that his fight with Floyd Mayweather on Saturday, 2 May will be one of the biggest fights in boxing history.

Mayweather meanwhile says that he is unfazed by the magnitude of the bout having broken the record for the biggest fight in boxing on a number of occasions.

The Filipino eight-division world champion will take on the undefeated Mayweather at the MGM Grand in Las Vegas with the purse expected to be in the region of £167m.

Struggles propel me onto highs - Leach