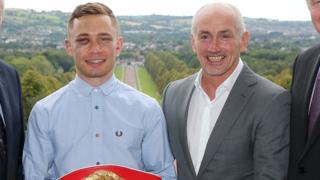 A title defence against IBF mandatory challenger Chris Avalos appeared to be the most likely option, but McGuigan insists Frampton's health "will determine what the next steps are".

After securing the belt in front of 16,000 fans at a purpose-built arena at Titanic Quarter, Frampton indicated a preference for taking on WBA champion Scott Quigg in his next contest.