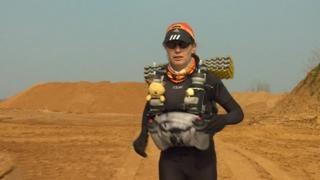 The vegan 'Queen of the Extreme'

As a teenager, Essex's Fiona Oakes had surgery to remove her kneecap and knee joint and was told she would never walk again.

But, at 48, she holds three world records, including becoming the fastest woman to run seven marathons in seven continents, plus the north pole, with an aggregate time of 31 hours 11 mins and 53 secs.

BBC Look East went to meet Oakes, who is also a vegan and nicknamed the "Queen of the Extreme", as she prepares to race 150 miles across the Sahara Desert to raise money for her animal sanctuary.

Return of fans 'something to celebrate'

Who has had made a legendary impact at Liverpool?

Wales are miles behind England - Jones