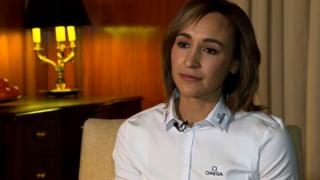 Olympic champion Jessica Ennis-Hill says she "wanted to voice my opinion" by threatening to have her name removed from a stand at Sheffield United if the club allowed convicted rapist Ched Evans to train with them.

Ennis-Hill told the club she wanted her name removed from one of the stands at Bramall Lane if Evans went ahead with training with the team on his release from prison, and police were called to investigate some of the subsequent reaction on social media site Twitter.

Evans, 25, had served half of a five-year jail sentence for raping a woman in a hotel room in Rhyl in 2011 when he was released on 17 October.

The club later withdrew its offer to Evans.

Listen to an in-depth interview with Jessica Ennis-Hill on 5 live Sport from 19:00 GMT on BBC Radio 5 live and the BBC Sport website.