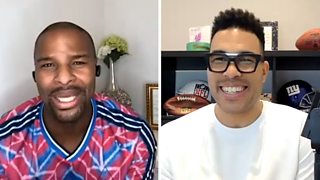 The NFL Show's Osi Umenyiora and Jason Bell look ahead to the NFL Championship games as the Kansas City Chiefs take on the Buffalo Bills and the Green Bay Packers face the Tampa Bay Buccaneers for a place in Super Bowl 55.

Who will come out on top in the battle of the quarterbacks as the Bucs' Tom Brady faces the Packers' Aaron Rodgers?

Watch The NFL Show on Saturday 23 January at 23:40 GMT on BBC One and BBC iPlayer.

WSL: Man City ahead at Birmingham plus two other games - follow live text

England will not complain to World Rugby