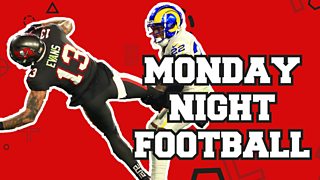 Watch Mike Evans charge past two 'defenders' to reach the end zone and score a touchdown for the Tampa Bay Buccaneers in their Week 11 game against the Los Angeles Rams.

The Bucs were eventually defeated 24-27 as the Rams move top of NFC West.

Watch The NFL Show on BBC One, BBC iPlayer and the BBC Sport website & app on Saturday, 28 November from 23.30 GMT with Dan Walker, Jason Bell and Osi Umenyiora.

What did Tuchel learn from Chelsea bow?

The most difficult transfer window ever?

The Soviet genius the world never got to see

'My parents are my icons' - Backstedt