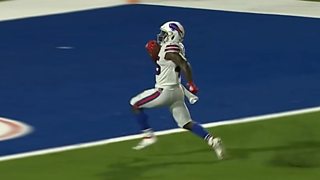 Former England and Wasps winger Christian Wade scores a 65-yard touchdown with his first touch on his debut for the Buffalo Bills in a pre-season game against the Indianapolis Colts.

Follow all the NFL action this season on BBC One from September when NFL This Week and The NFL Show return with Mark Chapman, Osi Umenyiora and Jason Bell.