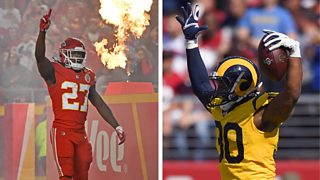 Hunt v Gurley: Who's the best running back in the NFL?

Osi Umenyiora and Jason Bell weigh up the virtues of two of the NFL's star running backs - Kansas City Chiefs' Kareem Hunt and Los Angeles Rams' Todd Gurley - and discuss who plays for the best team.

WATCH MORE: 'One of the best runs we've seen all year!' - NFL plays of the week

Watch NFL This Week on iPlayer and watch the Jacksonville Jaguars play the Philadelphia Eagles at Wembley, live on BBC Two on Sunday 28 October from 13:00 BST.