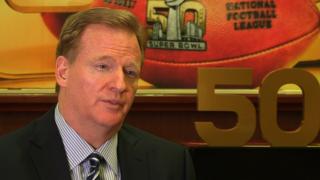 It emerged this week that one of the most celebrated quarterbacks of all time, Ken Stabler, had been suffering from a degenerative brain disease linked with repeated head trauma.

In an exclusive and wide-ranging interview with BBC Sport, Goodell said: "We've changed our rules, we've changed our equipment. We've made 39 rule changes to make our game safer. Our former players according to our government studies are living three years longer than you or I as an average male."

He also says he thinks a franchise in London will happen but the NFL would need to work out "unique competitive issues" in order to make it work. "There is no time frame. We want to do it right and make sure we are successful ultimately."

Goodell says the NFL has even discussed a foreign city like London hosting the Super Bowl but it is "some ways off".

Super Bowl 50 between the Denver Broncos and the Carolina Panthers is live on BBC Two (Sunday, 7 February - 23:30 GMT) and Goodell had some advice for British fans.

"Take a nap before the game because you don't want to miss it. You will see the spectacle that this has become. I believe it's one of the great experiences in the world. So I hope our UK fans take a nap and be perky for the ball game."

WATCH MORE: What is media night?

Tuchel set to come in after Lampard sacking - reaction

Marler and Launchbury out for England

Button to drive in Extreme E for own team