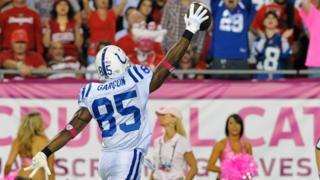 The win leaves the Buccaneers, who face the Chicago Bears at Wembley on 23 October, with a record of three wins and one loss, keeping pace with New Orleans in the NFC South.

The Colts, missing injured quarterback Peyton Manning, are now 0-4 - their worst start to a season since 1998.