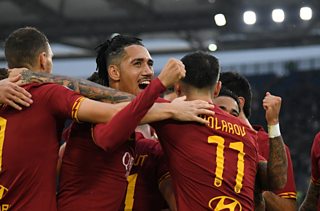 How AS Roma helped find a missing Kenyan child

When AS Roma signed Chris Smalling on loan, an image of a missing child was shared by the club on social media, alongside the English centre-back.

It was part of an initiative started by some Kenyan clubs and taken on by the Italian club.

Their signing videos go viral on social media, so they decided to include photos of missing children to try and make a difference.

Malan's 99 not out powers England to 3-0 series win