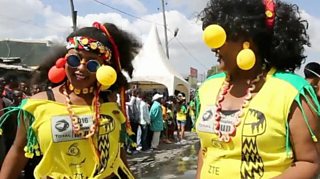 After July's historic peace deal between Eritrea and Ethiopia, Eritreans were able to compete in the Great Ethiopian Run in Addis Ababa for the first time.

Eritrea and Ethiopia had been at war with one another since until 1998, over a border dispute.

Despite the cessation of hostilities, the border had remained shut until a peace deal was signed between the countries leaders.

Massive punch in the face - Klopp