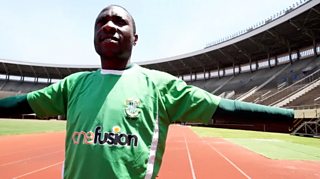 Amputee footballer back at the top level

After a car accident, Hardlife Zvirekwi had to have his arm amputated.

Before the crash he was an international footballer for Zimbabwe and he feared he would never play again.

However he has now returned to the game and is back playing in Zimbabwe's top division with his club, CAPS United.

Vote for your BBC African Footballer of the Year 2018 at bbc.com/africanfootball. Voting closes on 2 December 2018.

Champions League reaction & return of fans survey - are you going to a game?

Codes from dressing room an 'experiment'

Schumacher to join Haas for 2021